The View from Mary's Farm

I live in the town of Harrisville, New Hampshire, a little brick mill village that is not on the way to anywhere so its anonymity has been easier to maintain as the great sweep of time has moved from the 18th to the 21st century. The story of this village is somewhat epic. We’ll skip all the drama and go to 1857 when Harrisville seceded from the town of Dublin and became its own entity. During the Civil War, the big woolen mills were booming, belting out material used to make soldiers’ uniforms as well. The bounty of war was not only in munitions. Woolen fortunes rose and fell but in the 1960s, polyester pretty much replaced wool and the beat of the looms fell silent. Perhaps for good. The mills were shuttered. In 1971, instead of a “House for Sale,” Yankee’s column was retitled, “Town for Sale,” and the whole town was listed, the bankrupt mill and the buildings and houses that belonged to the mill, in essence, the whole entire village.
A man from New Jersey bought the town in order to relocate his business up here, which he did but he quickly resold (for one dollar) the houses and all extraneous buildings back to the family that had owned the mills for generations to avoid paying a fearsome tax bill. A lot of the buildings were boarded up and in disrepair, however, the fact that they were mostly brick perhaps saved them. Benign neglect. The family started something called Historic Harrisville. Under that umbrella, they gathered the town’s history, creating documentation of the remarkably intact industrialized village which in turn gave the village foundation to become, over time, a National Historic Landmark.
About that time, my aunt, who lived then in Amesbury, Massachusetts, took my grandmother, who was in her nineties at that time, for a drive. They liked to do that, exploring the back roads of New England. Returning from one of these rambles, my Victorian grandmother was heard to say that they had been to paradise, where they saw a “fairy tale village.” We all wanted to know where they had been so we could go there too. My grandmother described this place, in an almost operatic aria, as all brick buildings, a lake above and a canal that ran through and under them, falls tumbling like a ladder, down and down, through the center of town. But they could not say where it was or how they got there – just that they “happened” upon it. And so a quest began. Instead of the random drives they used to take, Nanny and Aunt Peg would set out to find again this fairy tale village. They drove and drove, this way and that and probably had some wonderful crawls past Norman Rockwell scenes but my grandmother died at the age of 98 in 1978, never gaining paradise again.
In 1982, I bought a little rundown house in the woods in Chesham, a small section of Harrisville. I had never heard of either town but it was near where I worked and I liked the promise the house held. I had big plans. I gave Aunt Peg directions to come see what I had bought. When she arrived, she was so excited, she scarcely glanced at my (humble) purchase. “I found it!” she cried out as she entered. On her way she had passed through Harrisville. “I found the fairy tale village again!” We stood in silence, mouths agape. How could it be? I had managed not only to find that storied village but, unaware that this was the place for which Nanny and Aunt Peg had searched so long, I made it my home. It’s only gotten better since.
From edieclark.com 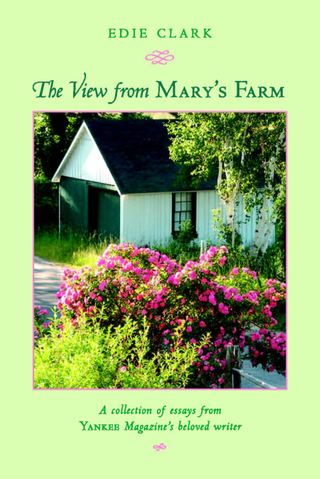 To order your copy of The View from Mary's Farm, click on the link at the top to this page. Thank you!