The View from Mary's Farm for July August 2011 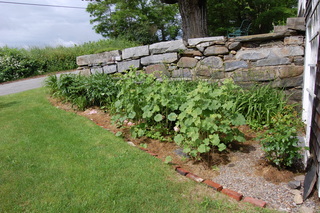 With a Little Luck

I once realized with sudden clarity that owning a home, a home that has some land and a few outbuildings, perhaps some animals, is no different from owning a small business. I manage the budget and prioritize the needs the same as any shopkeeper, lying awake with worries as well as hopes for expansion and improvements. One thing I lack in my little affair here are employees. Good help is not only expensive (budget item) but hard to come by (human resources). Especially in the summer months. Once in a while, with a little luck, the right person comes along at the right time. But there is usually a catch. Take, for instance, the Irish fellow who flew in and out of here like a rare bird on the wing. Friends told me about him. “He’ll do most anything for a very reasonable price. And his work is good.”

I didn’t need to hear much more so I called him. He had a gorgeous Irish brogue, the kind that is so easy to fall into, once you hear it a bit. “Howareya?” he sang out as he emerged from his older model Volvo. “Aye, gurgeous place here! Yuh’ve gut a bit o’ chores ta doo, have ye?” He was tall with silver hair, spiked up, not a young man but the piercing gaze of his blue eyes flashed intense energy. I showed him the gardens, the lily beds in particular, that had fallen into disrepair. It’s hard to give over a garden, only I know what’s in there and, oh, how well I know the weeds. “Nuh problem,” he crooned, “Oy ken doo that up in nuh time.” After I had shown him around, we sat on the porch and he told me the story of his growing up years in Dublin – Ireland. Eight children, hardly enough food to go round. They were hard years, worthy of the teller of Angela’s Ashes.

The next day, I went away. I hadn’t expected him to but he came while I was gone. When I arrived back, the lily beds behind the house were transformed, neat as the squares of a quilt. I was thrilled, even though he had left my garden tools strewn about and the wheelbarrow filled with weeds. It was more than I’d expected or hoped for. His muddy shoes were on my porch and so was his sweatshirt. But he was not.

A few hours later, he drove in. He was in a hurry, collecting his shoes and the few tools that were his. He asked for a nominal sum in return for his work. It was a bargain, by any stretch of the imagination. “Ooo, donchee worry now, el’ll be beck and take care of all ye’re gardens,” rolling those r’s to a fare the well. I couldn’t believe my luck. I wheeled the cart out behind the barn and dumped the weeds and picked up all the tools and returned them to the shed. If he came back, even twice, my place would look like a page out of Martha Stewart. I don’t, usually, but I whistled for a little while, as if my life had suddenly become care free. But, summer came and went and I never saw nor heard from him again. My gardens returned to being less than perfect. But I can still hear the musical manner of his speaking, the stories he told, and the promises he made. Aye, in this business o’ mine, ‘tis so.

(For more on this subject and on the subject of angels, go to my blog, www.edieclark.com/blog. And good luck in your gardens, wherever you are.)