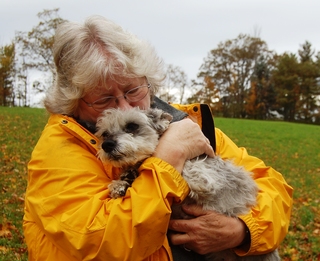 We can send men to the moon and clone sheep but no one has figured out how to extend the life of our dogs to even begin to match the length of our own. In my adult life, I’ve had three memorable dogs – Gorm, Dune, and Mayday. They all lived long lives, for dogs. When Dune came into that time of twilight, her warm brown eyes clouded into a strange blue and her hearing all but lost, I despaired of losing her. She had been with me when my husband Paul was alive and after he died, she refused to come out from under the bed for three days, which is what I felt like doing.
My parents died soon after. I found it hard to recover from all the loss. Now Dune was getting ready to leave me. I definitely needed help. The doctor recommended anti-depressants. I was reluctant. What about a puppy? That sounded easier to take so I found a mini-schnauzer with a delicious little face and eager eyes. I named her Mayday, actually “m’aidez” which is French for “help me” and from which we took our word for emergency: mayday! In seeking her, I was looking for a way out of the unending grief. Of course, as soon as she entered our lives, Dune and I were restored. New life! Mayday entertained us, infuriated us, and brought us joy. Better than Prozac any day.
But, alas, our scientists not working hard enough on the right tasks, Dune could not live forever and she surrendered at 17. More precisely, on the very day I had arranged to have her put down, she walked off into the dawn and never returned. Weeks later, I found her tired old body floating in the pond, a veritable Virginia Wolfe, equipped with clairvoyance to boot.
When they are with me I have called all my dogs, “best dog.” Because they are. Mayday was very much my best dog, a sturdy little terrier who could run like a racehorse and snore like an old man. It seemed like no time before she was reminding me daily of Dune at her most elderly, the cloudy eyes, the hesitant step, the occasional lapse in continence. By then, I had brought the puppy Harriet in to ease the inevitable. It took a while but eventually they bonded, under whose terms I will never know.
Unlike Dune, Mayday did not take her own life but instead we drove together, Harriet and Mayday and I, on a somewhat overcast October day to Vermont where their beloved vet, Andrea Nealey, waited. I carried Mayday inside, where she went peacefully and without protest, ending it all with only a small sigh. After, Andrea stood back and said, “She was one tough cookie." She opened her file. The first entries: “3 months old, chewed piece of cordwood, developed bowel blockage; 4 months: chewed up rug, bowels blocked, removed fabric ‘cork.’” So many other maydays followed. When the black lab tore her throat open; the time the two shepherds ripped her butt off. And no one will forget the evening she acquired 1,000 ticks, in the blink of an eye – a story worthy of Stephen King. I used to say that if we shaved her, we’d find a crazy map of scars and stitches, badges of her tenacity.
I named her Mayday because I was feeling sad and felt the need for "m'aidez" -- I didn't think I was christening her with a name that would establish her fate.
Andrea gave me a hug and then gathered my best dog into a soft plaid blanket and bore her away. I swallowed my tears and went back out to the car where Harriet waited – Harriet, on her way to being Best Dog.