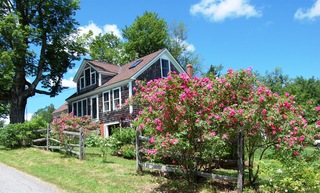 Change has been abundant since 1762

Hello friends!
It's been a while, a mixture, for me, of extreme busyness and some kind of deep perplexity that came to a long silence. When I don't know quite what to make of things (events), I go silent and this has been such a time. I have rarely had times when I don't write so it was strange and a bit puzzling to me. But the seasons are changing (we have yet to have a frost here). Time to pull up the garden plants, turn the compost pile, and till the soil to ready it for spring. Oh, and stack that cordwood. Half done now, hope to finish this week.
Two things have kept me busier than usual: I'm coming out with a CD, reading aloud some of my essays from Mary's Farm. That should be out in a couple of weeks. I will definitely let you know! And I have now posted The Place He Made and Saturday Beans and Sunday Suppers on Kindle! This is all new for me. The other books will follow as we become more familiar with the formatting and uploading -- all of that.
In the meantime, here is my essay -- another will follow sooner. I'll also resume blogging very soon! Thanks for your patience. Blessings for the fall!
Edie

The House that Benjamin Mason Built

This summer, my house turned 250 years old. I was at a loss as to how to celebrate this once-in-a-lifetime milestone. I have only taken part in fourteen of those years, less than 10 percent, and yet I feel its protection like a turtle in her shell.

I have no diaries to tell me of the lives that were lived here and I have only two photos, both of them taken in the 1940s. That leaves a great deal unknown to me. Within this old structure are faces I have never seen, fireplaces that have never warmed me, and doorways through which I have never passed. Though they have never made themselves known to me, ghosts live here, most especially the spirit of Benjamin Mason who came here in 1761 from Sherborn, Massachusetts, struck his claim, felled the trees, hewed the beams, carved the pegs, and raised the frame that still holds this house together. According to the Dublin town history, Benjamin Mason was the town’s first selectman and was “distinguished for his agility, fearlessness, and self-possession.” He must have been all of that and more. Because we gutted the house after I bought it, I have seen these stout, cinnamon-colored timbers and I left posts exposed to be reminded of his considerable work. I regard this carved frame with the kind of reverence I reserve for fine art and the light of the full moon. Still, that has not kept me from making vast changes to the house, which needed much when I came here. Little is as it was when I first walked through the kitchen door, on what seems like such a long ago August day.

When I was about three, my father bought a house on three acres of land, once part of a farm. The war was over and life could begin anew. The house was just being framed and we all enjoyed watching it take shape – we often took a picnic to the house and walked through the skeleton of what would one day be our home. I grew up in that brand new house, a pleasant experience but one that left me unaware of the legacy a house can hold. In all, my parents piloted that house through its first forty years.
Some years after my parents passed away, I happened to be in that area and drove by the house. I was driving slowly, engulfed by a tsunami of memory, and a man, working in his garden, looked up and waved. So I stopped and told him who I was. He grinned broadly and invited me inside. He and his wife had bought the house from my parents and they toured me through the house as they had shaped it: new kitchen, new master bedroom, bath with Jacuzzi – many changes and yet they were all necessary, maybe even imperative.

When I got home, I found photographs my father took of that house as it was being built. I put them into a small book and mailed it to the address that had been mine all my growing-up years. Living as I do now in a house with such a vast, unrecorded history made me want to, somehow, begin a record. Often we do things inspired by our own desires. I imagine an album of photos showing Benjamin Mason hewing these timbers and raising them into place, agilely balancing on the top beam to place the triumphant spruce bough. Maybe I don’t need to celebrate, maybe I just have to keep gathering the history, when and where I find it, adding to it as I go along.