The View from Mary's Farm for May 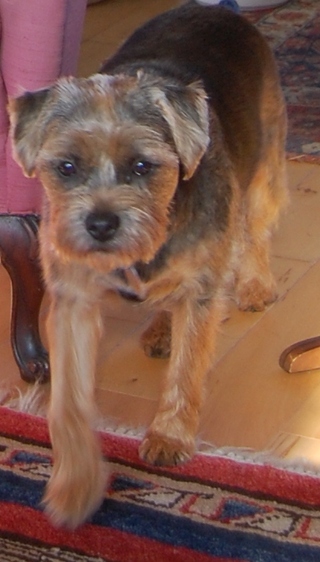 The innocent victim and Queen of Mischief

My three-year-old border terrier, Harriet, has been a big discipline problem since day one. Black with a white star on her chest and brindle legs and face, she is curious, rugged, and wicked cute. Good thing. She once chewed and pulled on the emergency brake handle in my car so vigorously that the town fire chief had to come to my rescue to disengage the brake. It has never worked since, just an example of the many naughty things she has done. Perhaps worst, she has an affection for Diet Coke cans, which she consumes, completely, except for the pull tab – the proverbial oink. She survives it all, with aplomb.

Over the summer, she was sprayed directly in the face by a skunk. When I went out to rescue her, I found her in the road, grinding her face into the pavement. I could hear the pebbles scrunching under her agonized face. I tied her to the run. As soon as the day began, I took her down to the groomer (windows rolled all the way down on a cold morning) to have her shampooed and shaved. Nothing else would do. When I brought her home, she looked pitifully naked and still smelled but at least being near her no longer made my eyes water.

A few weeks later, I was awakened in the middle of the night by a strange sound, like a shrill bird or an animal in distress. At first light, I heard the cry again and went to the window: through the dusky light, I could see a very large porcupine walking down the side of my big apple tree. She was making that very sound. I was immediately gripped by panic. A faceful of skunk juice is one thing but what would happen if Harriet got into a big old porcupine? Those quills can go into their mouths and down their throats and the ingenious fish-hook barbs at the end of the quills make it very hard to remove them. As soon as it was a decent hour, I called Brian, who often comes to my rescue. I was hoping he would come and whisk the porky away. But he was very busy. Instead, he offered to loan me his Hav-a-hart trap. Better than nothing. The trap is designed to catch the animal in the cage so that it can be harmlessly transported somewhere else. They come in all sizes. Sometime later, I found on my porch a huge Hav-a-hart, surely big enough to house a child. I had asked Brian on the phone what kind of bait I should use. He suggested a carrot. So I peeled a lovely fresh carrot to bring the sweet scent out. I took the trap down and set it under the apple tree. With some effort, I set the trap. I stepped back. It seemed poised for success, with its open trap door and the bright orange carrot sitting temptingly on the plate that would trip the door closed as soon as the victim stepped inside.

Harriet had been nosing around the garden while I was performing this unwelcome task. "This is all because of you!" I said to her as she poked around in the weeds.

As I walked away, toward the barn I heard the trap clatter shut. I turned and saw in the trap – not the porcupine but Harriet! She looked out at me pleadingly from behind the bars. I rushed to vindicate her. So far as I know, the porcupine continues to range free and the skunk has taken up residence in the barn.